Our Building - the Sanctuary

Hidden in the trees to the western end of Princes Street Gardens is the solid and imposing bulk of St Cuthbert’s Parish Church. The present church was built in 1892-94 when traces of at least six earlier church buildings were found. The cupolas and older steeple peep out at you along Princes Street, or from the train into Waverley Station, yet the church feels removed from the bustle of the West End.

Inside, the basilica layout with its apse and rounded vault, is complemented by the use of coloured stone for a rich and warm effect. Together, the design of the Communion Table (1894), the marble and alabaster Pulpit (1897) and the ceiling paintings (by Hope and Moira), give a Byzantine feel to the interior.

When St Cuthbert’s Church was decorated, the Italian Renaissance was considered to have been the high point of civilization, so it is not surprising that it was decided to copy some of the best works of that style for the magnificent new interior of the church.

In the apse at the eastern end of the Church is a modified version of Leonardo da Vinci’s Last Supper from Santa Maria delle Grazie, Milan. To fit in to the building here, the design has been split in three parts and made to curve around the wall. It is made from alabaster by Bridgeman of Lichfield.

Above the Communion Table there is a mural of Christ in Glory (by Robert Hope) while the Four Evangelists – Matthew, Mark, Luke and John – (by Sir Gerald Moira) are on the ceiling over the Chancel.

The whole effect of the east end of the Church is very rich and warm, with subtle colours from the different stones.

The font design is based on that of Jacopo della Quercia’s font in Siena Cathedral but in place of the Tabernacle used there, St Cuthbert’s font has a bronze Mother and Child sculpture. The sculpture is a copy of Michelangelo’s marble ‘Bruges Madonna’ statuette which is in Notre Dame Cathedral in Bruges.

The original Siena font is very deep, but to fit the statue on top of the one in St Cuthbert’s, it was changed and therefore the water is only around the edge. The font was designed by Thomas Armstrong – who was then keeper of Fine Art at the South Kensington Museum, London (now the Victoria & Albert Museum).

The pulpit was designed by the architect of the Church, Hippolyte J. Blanc, with some columns from San Ambrogio in Verona, and a relief panel of the Angel of the Gospel. When the angel panel was being brought ashore at Leith it fell and became trapped in the gantry and it took several hours of careful labour to free the panel without causing damage.

Old Testament scenes (on the north side) and scenes from the Gospels (on the south side) are shown in the windows installed between 1893 and 1912. They have rich decorative borders and an ornamented style.

The exception is a panel showing David on his way to slay Goliath (Tiffany glass). It was installed to commemorate a soldier of the Boer War and is strikingly modern in contrast to the other windows, relying on the deep colours of the glass and a simplicity of design.

The three Apse windows depict the Nativity, the Crucifixion and the Resurrection.

In 1990 the worship area of the church was reduced to give new rooms and make access easier for the elderly and disabled.

In the Lammermuir Hall is the bookstall, and it is also where you will find displays about the church and meet the stewards who will be happy to show you around (please see the Visit Us tab for more information).

The Lindisfarne Room, sumptuously decorated with the huge mural of St. Cuthbert on Lindisfarne (by Gerald Moira ) provides a bright and lofty space for groups and conferences.

The Nor’ Loch Room is lit by three spectacular stained glass panels showing scenes from St Cuthbert’s life. It is also a smaller space for meetings and seminars.

Take a 3D tour of our building here!

The Memorial Chapel is a the western most end of the church building. As you enter the Memorial chapel, you are stepping out of the current building, which was completed in 1894, and into the base of the tower of the previous church which was built in 1775. (The steeple was added to the top of the tower in 1789).

The entrance to the church was originally through a doorway in the wall that faces you as you enter the chapel. After new doorways in the north and south walls of the new church were created, this space fell into disuse. It was subsequently remodelled to the design of Macgregor Chalmers, as a memorial to those who died in the First World War. The space was consecrated as a chapel in 1921. The dedication of the chapel reads:

To the Glory of God and in memory of the men of St Cuthbert’s who fell in the War 1914 – 1918 this Chapel is dedicated. Greater love hath no man than this that a man lay down his life for his friends. 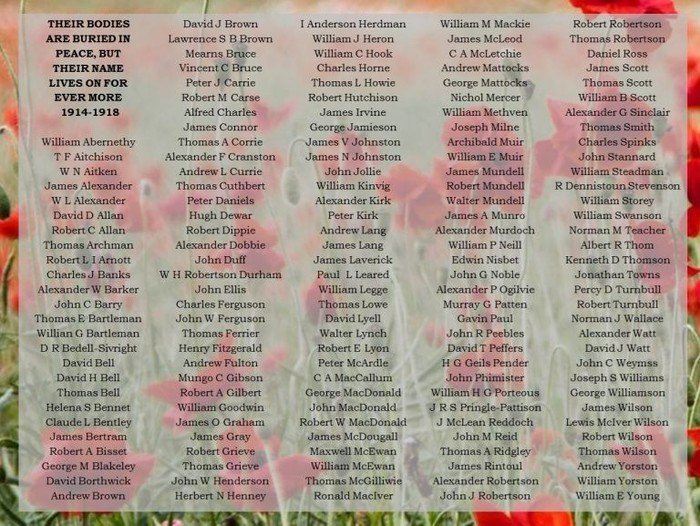 It is thought that this is on, or very near, the original site on which St Cuthbert, a 7th century monk, built his original hut on a journey from Melrose. This marked the beginning of Christian worship on this site.

The curved apse walls around the communion table are inlaid with beautiful gilt mosaic. If you are fortunate enough to be in the chapel when the candles are lit, you will see the mosaic almost come to life, as the reflected candlelight seems to dance around the walls. The other walls of the chapel are covered with Swedish green marble slab panels.

A small encased sloping support on the east wall bears the Roll of Honour.

On the wall panels are inscribed names of the 157 St Cuthbert’s people who died during the first world war. Only one of those named is a woman. Helena Bennet was a nurse, who died on duty at a camp of German prisoners in Oswestry during an epidemic of influenza. All the fallen are simply named, no ranks or other details are given. All made the same sacrifice, so all are remembered equally here.

The window in the north wall, behind the communion table, depicts Christ’s crucifixion, which we remember on Good Friday each year. Gathered around his cross are shown his mother Mary, dressed in blue, and some of the other women who followed Jesus. Also the disciple John, recorded by the bible writers as the only one of Jesus’ disciples with the courage to be present at Jesus’ crucifixion.

You may notice that the cross in this window does not rise as high out of the ground as in many depictions. This may be so that Christ can be seen to be suffering alongside his people, rather than at a distance from them.

The window in the south wall, opposite the communion table, shows scenes from the life of St Cuthbert. The left panel of the window, shows the child Cuthbert watching sheep in the Lammermuir Hills of southern Scotland. The central panel of the window shows St Cuthbert as Bishop of Lindisfarne. He is standing with his crosier in his left hand, and is holding the head of St Oswald, King of Northumbria in the crook of his right arm. This is because Oswald’s head was buried in Cuthbert’s coffin. The right of the window shows Cuthbert the monk, landing at the Holy Island of Lindisfarne.

The chapel also features small, beautifully decorated ornate tiles in a variety of designs, inlaid into the marble below each list of names, and a beautiful plasterwork ceiling.

This is a peaceful place in which to sit and linger, and if you are fortunate to be able to visit, we encourage you sit for a while here, and enjoy the peace of this special place, and reflect on the names around the walls, which are a reminder of those who died protecting their country in the past.

Sadly, as we are all too well aware, war still rages in many places in the world, so we would also ask all visitors (actual or virtual !) to take also a moment to remember those who continue to fight in the defence of others around the world. Particularly those who have been injured, and the families who have lost loved ones, on both sides of the conflicts, and also the innocents – civilians and children – who suffer in these conflicts through no fault of their own.

Although St Cuthbert’s was the mother church of no fewer than eight parish churches established during 1756-1869, we were the last parish church in the city to have a pipe organ. Built in 1899 by Robert Hope-Jones of Birkenhead, the organ was a gift of the Gorgie MP, Robert Cox. St Cuthbert’s first Organist was John W. Cowie and the original instrument was installed in two chambers on either side

When the internal fabric of the church was redecorated in 1928, the organ was restored and improved. Most of the 1899 pipe-work was re-incorporated to provide a summary of 29 speaking stops, 2 tremulants and 19 couplers, with a new electro-pneumatic action and the original four manual console (keyboards) as before.

During 1956-57, the organ was completely reworked, with a number of tonal additions, and rebuilt by J.W. Walker & Sons. The Great, Swell, Solo and Pedal were moved to the North Transept Gallery and provided with new case work designed by Messrs Ian G. Lindsay & Partners, Architects of Edinburgh.

The Choir organ was re-sited in the upper north Choir chamber in the original case work. The all-electric draw-stop console was placed opposite here, in the former Solo chamber and the original case work removed. The organ had 65 speaking stops and 18 couplers. It was re-dedicated by the Very Rev Charles L Warr on Palm Sunday 1957 and a recital was given by W.O. Minay, Organist and Choirmaster from 1946 to 1975.

After forty years of musical service the organ was again in need of attention, and Walker & Sons were called in for major reconstruction and improvement in 1997-98. Thanks to the legacies of two elders in St Cuthbert’s, Janet Lusk and John Shepherd, the restoration was carried out to the specification of Colin Tipple – a previous organist – in consultation with David Sanger.

The opportunity was taken to replace the old choir organ with an entirely new organ which includes Great, Swell and Pedal divisions playable from a completely revised, detached all-electric four manual console. These divisions can be combined with the main organ in the North Transept Gallery. The new section not only provides accompaniment for the church choir but can be used as a separate instrument for services held in the chancel.

Both organ cases were retained without alteration. The chancel case – designed by Hippolyte J. Blanc, the architect of the church – only needed cleaning whilst the North Gallery case was restored and polished. Between them they contain 114 display (visible) pipes. The reconstructed organ has 67 speaking stops, 3 tremulants, 20 couplers and 3 piston couplers, making a total of 93 registers.

The outstanding success of the latest phase in the organ’s development has given the parish an instrument of versatility and flair, capable of producing an astonishing variety of tonal colour. It is not too much to say that it now ranks among the finest romantic organs in Scotland.