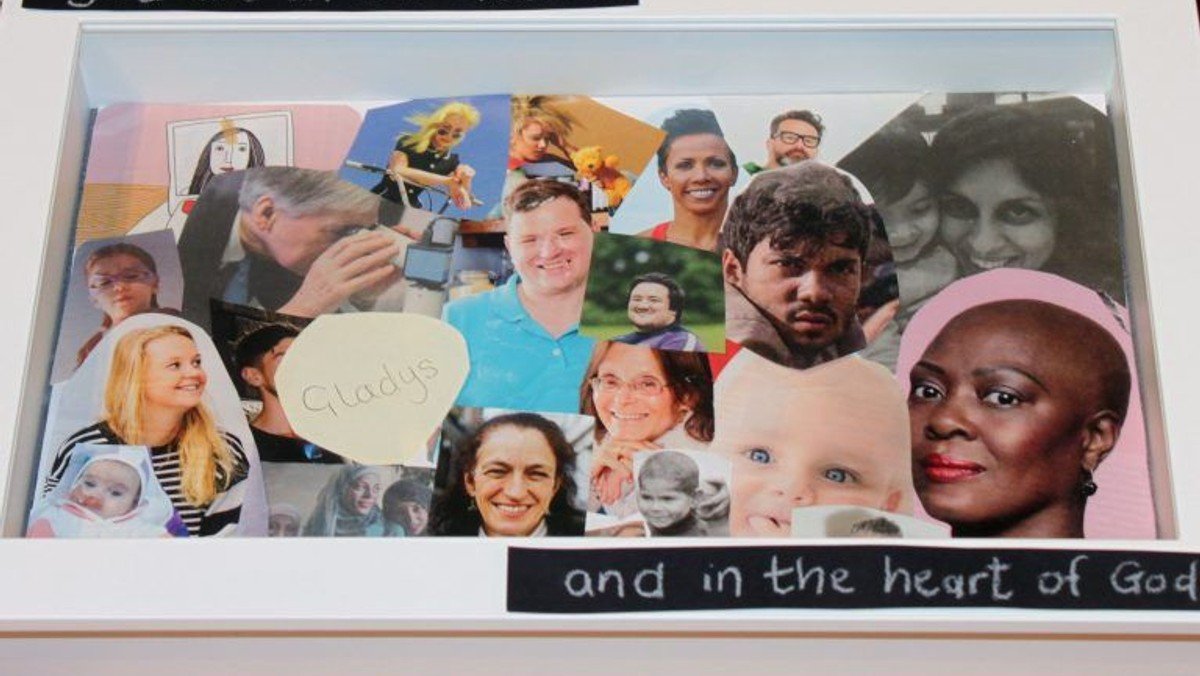 There are a team of us who do soulspace – it’s a monthly space for people to come in to pray or be silent or contemplate – whatever you need.  In a way, it’s a breathing space.

This whole large room is open from 12.30 until 8 pm, for you to drop in and use the space for your own contemplation.  Pop in when it suits you and stay for as long or short a time as you want.

“I’d like us to go through one moment of releasing any worries, concerns, things which are distracting.

I think it’s helpful if we do it in a moment – if you prefer to simply sit in the quiet, please do so.

We use our hand movements to pray with us.

Now we can choose to open our hand as a way of giving them to God and releasing them.

We can now turn our palms over and receive from God what we need – blessing and calm and wisdom.”

This year in Soul Space, our theme is Jesus as….

Last month, we looked at Jesus as human and divine – brilliant meditation by Iona Pringle.  Get it on the church website.

Today being April, I chose to think about Jesus as Fool.

What do I mean by Fool?
1. fool means doing what seems foolish!
2. And being a fool as in ‘mad’.
3. fool being like the King’s fool in Shakespeare – a court jester who says deep truths in proverbs and jokes.

This month’s theme: Jesus as Fool

I’m going to ponder on Jesus as fool and why this should matter to us.

As you can see, there are copies of Bee Gees lyrics on the seat

As I’ve been thinking about the topic of Jesus as Fool – another theme has snuck in.  It’s love.

Because love is profoundly foolish.

resource: I want to begin with a reading from the Good News according to the Bee Gees – this is from one of their songs on “Saturday Night Fever”.

…..which possibly lost something in the translation from the original Greek.

How deep is your love?

Love is incredibly foolish.  People risk all for love – love for another human being, love for family, for nation, for God.  It doesn’t appear on a balance sheet, a profit and loss account.

IMAGINATION EXERCISE
Imagine that you’re mentoring young people in careers. A client is chatting about what she’s going to do when she grows up – and she says, “First off, I’m going to help out in the family business for 10 years.  Then I want to be homeless.

I’m not going to spend money on clothes, just wear the one dress and I’m going to try to give away as much as I can to other people.

I won’t ever get a pension.

I’m going to challenge the authorities where I see injustice and I’ll likely be put in prison, be tortured and killed to silence me.”

Would you be happy with that?

What would an independent financial advisor think?

What would you think if this young woman went off and began working through that career plan.  And the next you heard, she had gone to 121 George Street, into the accountants’ office, thrown their desks out the window and shouted that they should be praying and not taking tithes from the poor?

That is the level of shock that Jesus’ life made.

Because he was like that imagined young woman.  His life was that dangerous and challenging.  He seemed foolish.

Jesus was rich in mercy, grace and love.  But financially…. he didn’t even die in the clothes he stood up in.

I find we’ve lost the sense of how outrageous he was, how shocking in his own culture.  I hope this soul space helps us recover that.

And it’s good to ask questions.  I hope you leave with at least one question today to ponder on.

Foolish.  Doing things which don’t seem to make sense or be useful.

He was profoundly aware of his society – he knew when the local people were wanting to forcibly crown him as political leader, as king – and he knew when the person in front of him was sincere or trying to trap him verbally.

Who or what do you value?  Because Jesus seemed to do foolish things because his values were different.

Jesus told a story about a rich man – who decided he would have to build more storage for his harvest – but the end of the story is the line “Fool, this night, you will die”.

Here is an example of one of the  followers of Jesus who also had values which astounded people – St Lawrence.  Do we know the story of St Lawrence?

A great persecution arose under Emperor Valerian, where all clergy were condemned to death and their goods confiscated to the Imperial treasury.

They decapitated the pope.  Lawrence was on the condemned list and told to produce the church treasures forthwith.  He asked for 3 days to gather it.  Spent those 3 days giving out the silver and gold to the poor.  Then gathered a group of the most incapacitated people – poor, blind, crippled and presented them to the Prefect, saying “Here are the treasures of the church”.

Prefect furious – ordered slow death over coals not too hot.

St Lawrence took this in good part and allegedly said “I’m done on this side, do you want to turn me over?”

He became the patron saint of cooks and comedians.

A modern martyr also showed his values: Jim Elliot was a missionary to Auca Indians in Ecaudor.  Feeling threatened by him, they killed him.  In Jim’s journal, they found a line:

Jesus talked about an upside down kingdom where things were different than the values society tends to have.

There’s even a time when the Bible tells us that his own family thought he’d gone mad and came to try and take him out of public view.

Read Mark 3  Jesus was healing people, casting out demons and had just got 12 people to become his followers.  So he was setting up something.  The scribes from Jerusalem thought he was demon possessed himself.

What happens?  Jesus’ family turn up, ask to see him, and he just says: “everyone who does God’s will is my family.”  He even says they are ”my brother, and sister, and mother.”  This is interesting – because many people have got caught up in how amazing Mary his mother was.  She’s almost been worshipped.  But Jesus is saying that when you do God’s will, you’re as close to him as she was.

Is this our view of Jesus?

Is he that strange to 21st century?

C S Lewis looked at the life of Jesus and he said there are only 3 responses: a: he was mad

The option to think he was a nice gentle man is simply not on the table.

And then there’s the idea of “Fool” like you see in Shakespeare’s plays. Someone who is like a jester.  He says things to the king, to those in authority which seem to be a joke – but which have wisdom in them.  King Lear has a key relationship with his jester.

Jesus did a lot of his speaking through proverbs.  Funny stories about camels fitting through the eyes of needles.  Crazy stories about a son who gambled away his inheritance and the father welcomed him back and threw a party to celebrate.  Really unexpected things.

In the culture of Jesus, where you honour your elders and family and tribal ties are all – the story was counter-cultural.  Shocking.  Foolish.

The people around him recognized his wisdom and power – and asked him questions.  He welcomed this.  He spoke in parables that had them guessing.  And he asked questions back.  He spoke with peasants, he spoke with the best legal minds of his generation – the theology professors – and he left them with questions to ask themselves.

A lawyer stood up to put him to the test, saying
“Teacher, what shall I do to inherit eternal life?”
He said to him, “What is written in the law?  How do you read?”
He replied: …………….
“You have answered right….. do this and you will live.”
Lawyer, wanting to be self-justified then asks him for definition – what is a neighbour.  Who is mine?
Jesus tells the outrageous story of an Arab showing mercy to a Jew.  And to add insult, in his story, a Jewish priest and a Levite (also religious professional) don’t help.
Jesus then asks “Who do you think was neighbourly to the victim?”
The lawyer gives the right answer “The one who showed mercy”.  Jesus said “Go and do likewise.”

This is the difference between knowledge and wisdom.

Knowledge is you know the principles, the rules, the words.

Wisdom knows what to do and when, and puts it into practice.

Jesus was wise.  He put what he believed into practice.

Stories are in metaphor.  It’s the language of poetry.  It has depths.  Different depths.

Jesus told stories for life.  You can grow into them.  And 2,000 years later, you still hear sermons on the parables.  You can hear different ones, but those sermons still haven’t exhausted the possible meanings.

His parable answers are still being debated.

The jester spoke to people in authority, challenging them or bringing them the unpalatable truth.  Jesus did this all the time with the religious leaders and they murdered him for it.

In the central Temple, he literally pushes out those who bought and sold and said “Is it not written ‘My house should be a house of prayer’ “.  He’s bad for business.

One final question for us:

DOES IT MATTER WHAT WE THINK ABOUT JESUS AS A FOOL?

Yes.  Because if we find him safe, unchallenging and being socially respectable – then maybe we’re not seeing him for who he is.

And that’s worrying because if we’re following someone, trying to live life how he did …. then we need an accurate picture of who he is.

Paul thinks so.  He wrote a job description for a Christian leader which looks remarkably similar to the life of Christ – and you’ll find it over there.

Please feel free to take one and give to anyone you know in Christian leadership who needs a bit of encouragement that They’re Not The Only One finding it not very glamorous.

If we are willing to encounter him as the wise fool and be like the woman at the well – ask him questions about what we don’t understand.

And let him ask questions of us – let him offer us living water – then we truly meet him.  And come to know how deep is his love.

The front of this room is full of words and pictures to help you engage – please stay and use them.  Take away questions – if you haven’t already got a million, there are some over there on the table.

And I finish this meditation with the verse of a song written by Alison Robertson, who is a composer who worships here.  Her song is called “The fools song?” and ends:

“Welcome the man who can walk on the sea!
Welcome the life from the death on the tree!
Jesus is making and breaking the rules –
Welcome, dear Jesus, the wisest of fools!"